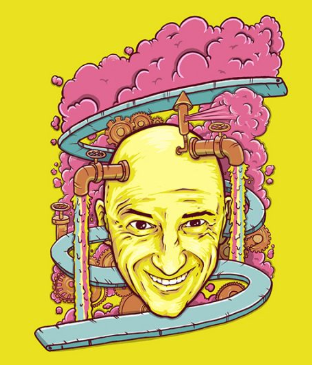 I didn't realise I could laugh for so long - but the laughs kept on coming. Not to mention the jaw-drops when I couldn't believe the things he was getting the volunteers to do! (READ MORE)

Comedy hypnotism may sit outside the comfort zone of some festival-goers, or at least on the fringe. But that didn’t stop 20 eager volunteers approaching the stage to be put in a trance on the opening night of this show. Fun is the theme of Comedy Hypnotist Matt Hale’s Feelgood Factory, and Hale delivered it in spades for those on stage and in the audience alike. (READ MORE)
Fringe review: Comedy Hypnotist Matt Hale’s Feelgood Factory
Play and Go Adelaide - 4.5 stars "for engergetic fun!"
Review by Carla Caruso
comedy hypnotist Matt Hale – leaping onstage in a pink tee and ripped jeans – was quick to reassure the audience that it was a “volunteers only” show...Matt didn’t have a shortage of willing volunteers on the show’s opening night.
I wish I’d gone onstage too.  Then again, maybe I still can – as the promo material says: “No two shows are ever the same!” I could make my return. My twin boys had a blast in the audience too"
Read the full review here

The is a high-energy show, with Matt starting off running and dancing around the stage for the first 5 minutes, getting the crowd into the mood.... This is Matt Hale’s first time in Adelaide, after performing world-wide, and he didn’t disappoint. A very energetic and funny show and well worth seeing.  (READ MORE)

“Have I just had a massage?” This is the question my 18-year-old daughter asked after her first Matt Hale show. “I felt a tap on the shoulder. Was that a massage? He’s right, I do feel like I’ve had a good night’s sleep. . . ” (READ MORE)

As promised, Comedy Hypnotist Matt Hale’s Feelgood Factory, is really all about happiness: even if it is only experienced for just 60 minutes of the show’s duration and an hour or two post-show. As a hypnotist show first-timer, I was genuinely sceptical about Hale’s ability to leave me ‘ridiculously happy’ (as promised in his show description) after a fairly stressful day but can honestly attest that at one point during the show, I found myself with tears in my eyes from laughing too hard. (READ MORE)

The audience was wowed by how quickly their friends and family went from being their normal selves, to dancing like no one was watching, and enthusiastically adopting any character Hale assigned to them. (READ MORE) 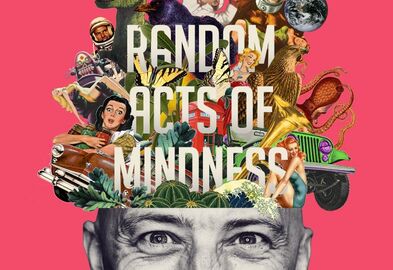 ​International performer Matt Hale returns to FRINGE WORLD in 2020 with a brand-new show, Random Acts of Mindness. Combining his very own genre of hypnotism with tasteful audience participation, this show is like your favourite movie: you can watch it over and over again and never get bored. (READ MORE)

If you have ever doubted the legitimacy of hypnosis, then Comedy Hypnotist Matt Hale’s new Fringe show ‘Random Acts of Mindness’ is an absolute must-see! Held in the Megamouth Tent at Yagan Square with a few odd shows at the Pleasure Gardens and at the Big Top, Matt’s shows are guaranteed to be packed out every single night. (READ MORE)

Comedy hypnotist Matt Hale is back at Fringe World for a fifth year, bringing his trademark fun and fan base along for the ride, with a show that is right up Fringe alley.  Renowned for his unique and modern brand of hypno-laughs, Matt hypnotises completely random volunteers from the audience in the blink of an eye in his 60-minute show, RANDOM ACTS OF MINDNESS. (READ MORE)

​Comedy Hypnotist Matt Hale’s Random Acts of Mindness is a show to reconnect with your inner child and say farewell to the fear of being silly. Hale challenged the audience to play with the power of mind illusion and encouraged everyone to take their imagination by the reins for 60 minutes of laughter. Working purely with volunteers from the crowd, the show offers a thought-provoking (and hilarious) insight into the world of hypnosis. (READ MORE) 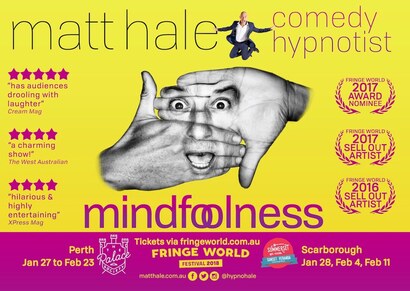 With his energy, comedy and charisma Matt is a born entertainer making the audience laugh without any embarrassment for the volunteers! I'd love to see the show again as an audience member! (READ MORE)

Already up for a Perth Fringe Festival award for 2017, this show has audiences drooling with laughter. What makes Matt’s productions so successful is that he is a true gentleman, respectfully never humiliating a cautious audience but invoking the “best experience of my life” as one stage volunteer quipped to me under a trance-like puppy crush. Matt’s shows are chicken-free but the punters sure know how to put on a fun act under his spell.

At first, the average audience member is curious yet somewhat fearful of going up on stage to be hypnotised, as was I on my first foray into hypnosis on Matt’s sneak preview. Yet the growing anticipation of myself and other patrons prior to the show, and the willingness of volunteers to fight it out for a revered spot on stage, is testament to the amazing experience that Matt’s deliciously hilarious show offers. Audiences thrive on and boast about their exhilarating experiential and uplifting induction into the mysterious world of hypnosis with a witty comedic bent that had me and them eating out of their master showman’s hand.

From the rapturous bullet train start (so imaginative and talented) to the side-splitting finale, the audience was in love. Perth-bred Hale is not only a master in the art of comedy hypnosis, but his fiercely friendly smile and charm are delivered with such clever timing and intuition, audiences ache in laughter and bemusement. I must confess having experienced two shows from separate vantage points: as audience voyeur and stage volunteer, I had a blast participating but also thoroughly enjoyed the opportunity to laugh at others, in a nice way of course!

One of the best aspects of attending Matt Hale’s Fringe show at the funky Noodle Palace and rooftop bar, is that it is such a fun and delightful experience, where the energetic atmosphere charges the audience prior, during and after each show. The alfresco pop-up outdoor venue is perfect; where volunteers can later chat about their escapades of hilarity. Matt, the social butterfly, savours the post-show meeting and greeting, taking obligatory selfies with his dutiful audience, which all make for a memorable and utterly enjoyable night out.
​
With a fast growing number of fans and accolades of “pure genius”, it is no wonder, his latest show: clever, mesmerising, mind blowing and such a delight, leaves the audience chanting “he’s the man!” Indeed, when Cream profiled his show last year, we left the review on those three words. For now, we’ll let him run with the gag!  Annette McCubbin
THE WEST AUSTRALIAN - 4 STARS

REVIEW: LAURA MURPHY
Matt Hale Comedy Hypnotist is a charming show and opens with an unexpected display of talent and illusion.
Perth’s golden guy is back with another fun-filled 27-night run for Fringe World 2017.

The show is taking place in Soba Stadium at Noodle palace for 24 nights, two nights in Scarborough and one in Mandurah.
The small stage in Soba Stadium seems apt for a one-man show, but packed with chairs ready for volunteers.
It doesn’t take long for chairs to fill up with eager audience members jumping out of their seat to participate.

After his 20 sell-out shows at 2016 Fringe Festival it appears the legend of previous years has carried on as the second night at Fringe 2017 was sold out, too.

After a great opening act, the show is comprised of classic hypnosis actions and funny moments.
At times some of the hypnotised volunteers seemed to go above and beyond, perhaps playing up for the crowd.
Hypnotism will always face scepticism and doubts might possibly arise, but surely it would be hard for all 12 to keep a straight face throughout.

Comedy Hypnotist is family friendly with no sign of X-rated hypnotic antics or embarrassing moments.
It is a shorter-than-expected show because it runs at a fast pace.
It is a safe environment to enjoy a trance-like experience or to appreciate the magic of hypnotism from the comfort of your chair.
Matt does a good job keeping the volunteers under his spell and the audience amused simultaneously.

Having won three national comedy awards, he knows how to work the crowd and crack a joke.
​
The show runs until February 19 and will be moving between Soba Stadium at Noodle Palace, Hubbub Boardwalk in Mandurah and Sunset Veranda in Scarborough.
THE AUSTRALIA TIMES
​
Review by Kieran Eaton
Everybody knows hypnotism, yet there are only a few famous hypnotists. I guess it is because it is hard to make it natural and still Perth based hypnotist, Matt Hale achieves this in his slick show.
Hale is a good speaker – getting more than enough people assisting him, in this journey. There is a background given of how hypnotism works, giving the audience a realistic expectation. Some people may think it’s easy to be put in a trance but some minds are not ready and relaxed enough to be in this state. It is a very interesting process and you learn a lot about all the parameters.  Hale brings intense excitement to the room in getting a huge variety of volunteers on stage. They are a mixed bunch so the expectation is huge from the audience that their family and friends will be doing some weird stuff!
Once Hale has his volunteers on stage, he tests their ability to fall quickly into a hypnotic state. To gain maximum effect, any weak participant he instructs off the stage and they casually do this. Eventually, when he gets the optimal group on stage, the silliness begins to rock on. Hale is quick to assess who would be the most amusing and works well in highlighting each of the volunteers’ personalities.
Comedy Hypnotist Matt Hale: Serving Suggestions gives insight into the world of hypnotism with amusement and professionalism that leaves your hands sore from clapping so much!

Possibly the last way you'd expect a comedy hypnotist to start his show would be (the way this show starts!), but expectations make fools of us all eventually.There was a purpose to the apparent madness though, as in one elegantly deft feat of multi-tasking, Hale demonstrated the power of suggestibility and the capabilities of the human mind.

Regular service was soon resumed and an enthusiastic audience rushed at the chance to go under. Indeed, many would-be volunteers had to return to their seats as all spots on stage were grabbed in a handful of seconds. Unlike some acts who take their audience-volunteers behind a curtain, the actual hypnosis was done live on stage.
​
Hale orchestrated a deft touch over his somnolent cast, often at breakneck speed. There were a few standard hypnotism tropes that you might expect, sexy dancing, reacting to disgusting smells, etc, but also plenty of originality and of course the wildcard reactions of the volunteers themselves. It was a masterfully controlled set by Hale, one which had punters laughing their way through the doors after the end.